Wine Victoria is pleased to report the booming growth in wine exports from Victoria and Australia for 2015.

According to the Wine Australia Export Report December 2015

, the value of Victorian wine exports in 2015 increased by 19.3 percent, with an 11.3 percent increase in volume for bottled exports. The value of Australian wine exports overall jumped 14 percent to $2.1 billion in 2015, reaching its highest value since October 2007.

“This is excellent news for our members, the grape growing and winemaking industry in Victoria. The December 2015 report shows that we are successfully exporting wine to traditional and emerging markets and increasing the value of Victorian wine, especially bottled wine,” said Wine Victoria chairman Damien Sheehan.

Sheehan attributes the success to the high quality wine produced in Australia. “The wine industry is an export-oriented industry and this latest uptick in exports is a good sign that we are producing premium wines that are highly sought-after in countries such as China, the UK, U.S., Canada and Hong Kong.”

The value of exports increased at each price point, where the largest increase was in wines with a free on board (FOB) value over $10 per litre. Sales of FOB wines grew by 35 percent to $480 million, a record level of exports in this segment. FOB wines now make up 23 percent of the value of Australia’s wine exports.

A detailed breakdown of this growth for exports of wines with a FOB over $10 per litre shows wines valued at FOB: 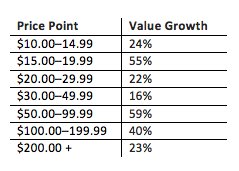 “As market access and on-ground support strengthens, we will continue to work with Wine Australia to focus on increasing premium wine offerings to secure new export markets,” said Sheehan. “Wine is one of Victoria’s most valuable food exports, so capturing new export opportunities for businesses in Victoria is a top priority for the association.”