This committee has been established to provide advice on: 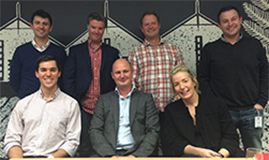 The Future Leaders program has been designed to help talented, ambitious people in the Victorian wine industry grow to their full potential, while ensuring sustainable governance by training future leaders for board membership.

The first intake of Future Leaders was announced in April 2015. Current members are:

Wine is one of the five key sectors featured in this year's program, which aims to bring buyers, distributors and industry professionals from around the world to Victoria.

The event will be held from 27-30 October 2015. International delegates will be introduced to producers, suppliers and chefs through events such as:
• The Victorian Food and Beverage Showcase, featuring 200 current exporting and 'new to export' exhibitors
• A site visit program to food companies, based on sector of interest
• A tailored business matching session to connect new and existing business partners
• A series of networking functions including a gala food and business industry reception.

More information about the trade mission is available here.

Wine Victoria has today welcomed the Victorian Government's announcement on industry members who will form a newly established Wine Industry Ministerial Advisory Committee.
The announcement was made last night by the Minister for Agriculture, The Hon Jaala Pulford at the annual 2015 Royal Melbourne Wine Awards (RMWA) where many Victorian wineries were acknowledged for excellence.

Wine Victoria Chair Damien Sheehan, who was selected for the committee, said the announcement was timely, taking place no a night when the depth of Victoria's winemaking talent and premium products were celebrated.

"On behalf of our industry I am eager to work the Minister and fellow industry representatives on the development of programs that will grow key wine export markets and localised tourism activities.
"Our association has been making the case for a strong partnership arrangement between government and industry to grow export markets, particularly in the US and China, especially now that the dollar is making our industry far more competitive.

"Equally we know that strong tourism visitation to our regions enables our members to build relationships with their customers and ease some of the pressure of relying on the current retail monopoly."

Mr Sheehan also acknowledged the three additional Wine Victoria representatives named on the committee.
"I am thrilled to be sharing this committee with fellow Wine Victoria Board Member Angie Bradbury and two of our Future Leaders - Katherine Brown and Michael Dalzotto," said Mr Sheehan.

Note: next page is the full list of Wine Industry Ministerial Advisory Committee

The Victorian wine industry has:
− 21 distinct wine regions that span the entire state
− More than 25,000 hectares of vines
− 800 wineries and 3000 vineyards
− Employs 12,000 people
− An estimated economic value of $1.5 billion per annum
− Approximately 1.5 million winery visitors per year
− In 2014, 23 million bottles of wine were produced, of which 60 per cent were export ready.

Wine Victoria is continuing to advocate on our planned burns policy platform. The importance of this work has been underscored by the start to the Spring planned burns season and predictions for a hot summer ahead.